CSIO Barcelona 2017 is here. The best riders and horses arrive to Barcelona 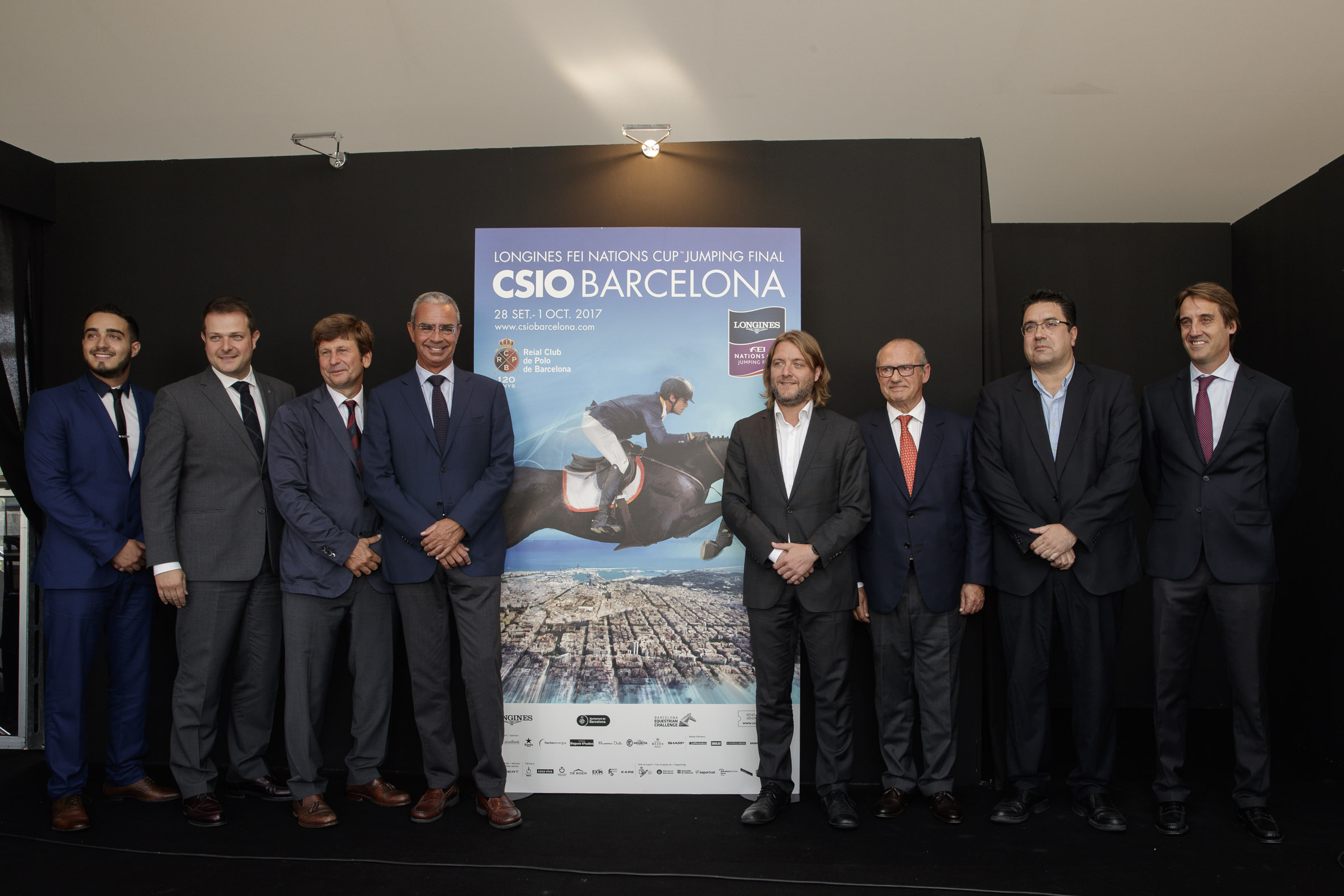 “13 of the 20 best riders in the world will be here” announced Santiago Mercé, the
new President of the CSIO Barcelona at the Official Presentation of the 106 th CSIO
Barcelona, the 106 th edition of the oldest sporting event in Spain, which will be held at
the Real Club de Polo de Barcelona, from Thursday September 28 to Sunday October 1.
Eight jumping competitions will take place over the course of four days, including the
Longines FEI Nations Cup TM Jumping Final, the leading team competition in the world.
The best squads have a meeting in Barcelona
Germany, Belgium, Brazil, Canada, France, Great Britain, the United Emirates, the
Unites States, the Netherlands, Ireland, Italy, New Zealand, Sweden, Switzerland and
Spain. A total of 15 teams travel to Barcelona with their best athletes, including the
American Mclain Ward, 3 rd in the world ranking and gold medalist at the Athens and
Beijing Olympics, the French rider Kevin Staut, gold medalist at the Rio Olympics, Scott
Brash, ranked 5 th in the world and gold medalist at the London Olympic Games,
Sweden’s Peder Fredicson, silver in Rio and European champion, among others.
Laura Roquet, the child prodigy of the Spanish national team
Spain also confirmed over the past few days the team that will compete in the Nations
Cup. It will be formed by its usual riders, Eduardo Álvarez Aznar, Julio Arias, Manuel
Fernández Saro, Gerardo Menéndez Mieres and a new and exciting addition: the
young Catalan rider Laura Roquet, who will make her debut as a member of the
national team in at a first division CSIO*****.
The official presentation of the CSIO Barcelona 2017 was also attended by Gerard M.
Figueras, Secretary General for Sports of the Government of Catalonia, David Escudé,
Barcelona City Council’s Commissioner for Sports, Daniel Laga, Sports Coordinador of
the Barcelona Deputation, Francisco Espinós, RCPB President, Emilio Zegrí, RCPB
Foundation President, Daniel García Giró, CSIO Barcelona Director and Karim Lahleh,
Sponsorship Sales and Commercial Operations Manager.
Emilio Zegrí, RCPB Foundation President, underlined the social aspect of the
competition, with initiatives supported by the Barcelona Equestrian Challenge, such as
the contest “A Jump for the City”. David Escudé, Barcelona City Council’s
Commissioner for Sports, emphasized the importance of the collaboration between
the public and private sectors embodied by the CSIO Barcelona.
The PoloPark is back and better than ever
One of the great attractions of CSIO Barcelona 2017 will be the PoloPark, a festival of
creative experiences new tendencies, gastronomy and activities under the slogan
“FOOD, FUN &amp; JUMP!”. During the four days of the tournament, the polo field (20.000
sq. meters), will become a unique area with activities for all kinds of public: the Little
Rider’s Corner, which includes the popular Pony Park, the leisure area Kids Park, a wide
variety of gastronomic options at the Foodie Fest, the Market and Brand Village, the
Horse &amp; Rider zone, focused on equestrian products, or the new Body and Mind area,
all of this accompanied by live music and other shows.
An edition that will pay tribute to the Olympic team

The CSIO Barcelona 2017 coincides with two anniversaries: the 120 th anniversary of the
Real Club de Polo de Barcelona and the 25 th anniversary of the Barcelona Olympic
Games. One of the major clubs of the city will pay remember to the dramatic
transformation brought by the Olympic flame, with a tribute to the 1992 Olympic
Team formed by Cayetano Martínez de Irujo, Luis Astolfi, Enrique Sarasola and Luis
Álvarez Cervera. The 106 th edition of the CSIO Barcelona will take place the at Real Club
de Polo de Barcelona from September 28 to October 1. On Thursday the entry will be
free.