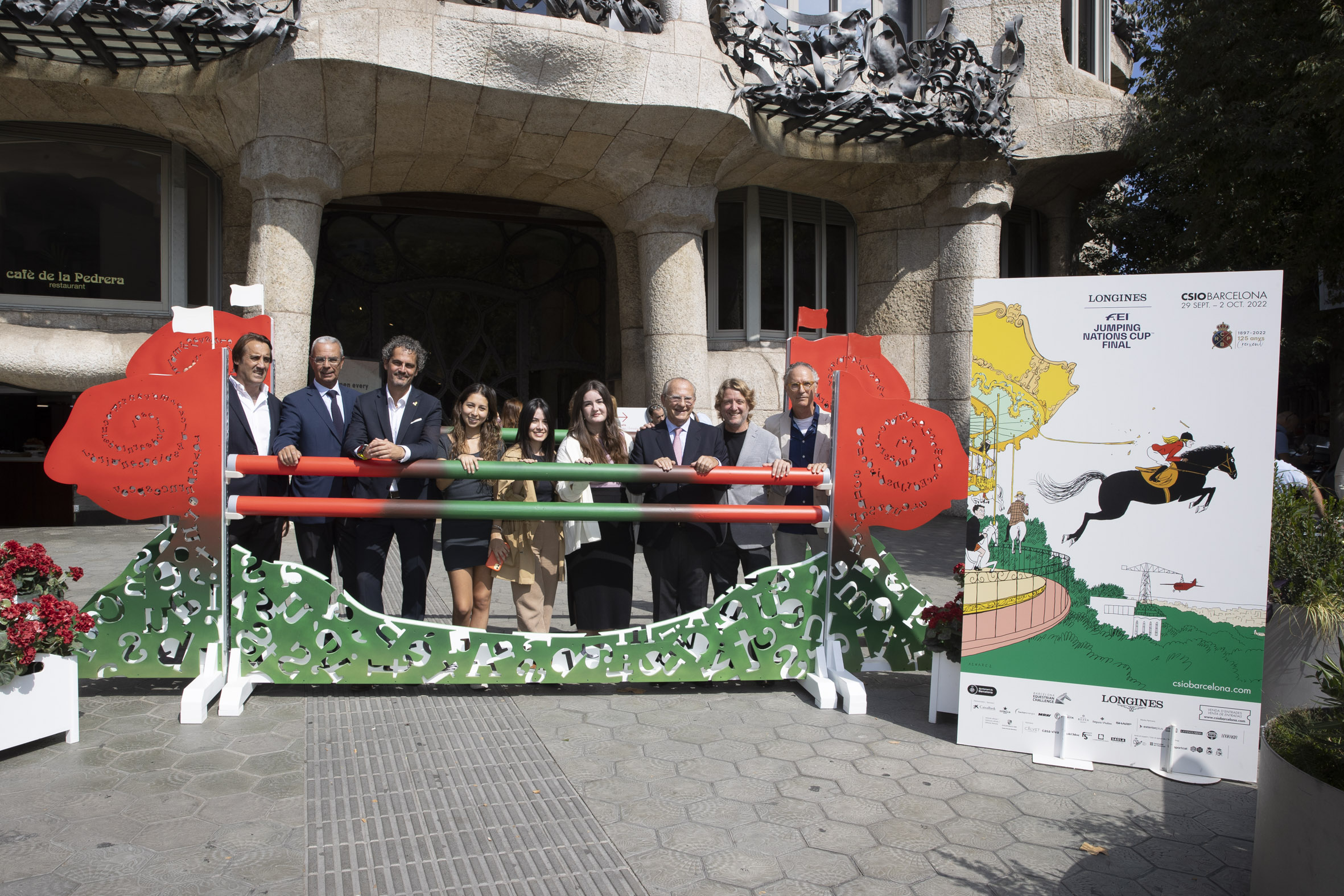 La Pedrera was the setting for the Official Presentation of the obstacle "The Rose and the Book", winner of the 8th Edition of the 'A jump for the city' competition, which consists of designing a jump for the CSIO Barcelona.

The Diada de Sant Jordi and the well-known sculptor Jaume Plensa have been the source of inspiration for 'The Rose and the Book'. The design is a clear homage to the city of Barcelona, culture and love.

The letters, present on the obstacle, are based on the poem 'Visca Sant Jordi!' by Lola Casas, and with a clear reference to the sculptor, they are transformed until they raise two marvellous red roses, one on each side of the structure.

"We wanted to represent the power of letters to form words, texts and stories to connect us," confirm the winners of the contest, Andrea Álvarez, Cecilia Barrios and Renata Garcés, students at the LCI Barcelona design school.

"The Rose and the Book" will be part of the different courses of the CSIO Barcelona 110th edition, the oldest international sporting event in Spain, which will take place from 29 September 29 to  October 2 at the Real Club de Polo.

Organised by the Barcelona Equestrian Challenge in collaboration with LCI Barcelona, this action aims to further strengthen the link between the centenary sporting competition at the Real Club de Polo de Barcelona, as well as the international promotion of the city.

Emilio Zegrí, RCPB Foundation president, said, "at the Real Club de Polo de Barcelona Foundation we are dedicated to promoting culture by supporting young talents from the world of design and our aim is to place Barcelona in the international spotlight".

The Director of the Consell Català de l'Esport, Aleix Villatoro, remarked that "110 years are very respectable figures, and the initiative of making an obstacle related to Catalan culture so that Barcelona can be recognised in the world is excellent".

On the other hand, the Sports Councillor of the Barcelona City Council and Deputy Delegate of Sports of the Diputació de Barcelona, David Escudé, declared: "The obstacle adds tradition, sensibility and to celebrate the 125th anniversary of the RCPB there is no better way than doing it with such a symbol of ours as the rose and the book". He ended by reiterating the support of the administrations so that the city can host world sporting events such as this one and, in this way, put Barcelona on everyone's lips.

For the ninth consecutive year, from September 29 to October 2 at the Real Club de Polo de Barcelona, the CSIO Barcelona will host the Longines FEI Jumping Nations Cup™ Final, the most important equestrian event on the international equestrian calenda. In addition, CSIO Barcelona will once again present the PoloPark, a playful space, full of creative experiences, new trends, shows, gastronomy and entertainment activities for all audiences.